On July 29 the price of Aave (LEND) surged 23% as the project released its tokenomics update proposal called Aavenomics.

The upside move brought LEND’s market cap to $447 million and will surely have investors curious on whether the DeFi-related token will surge higher as it has already gained nearly 600% over the past 3 months. 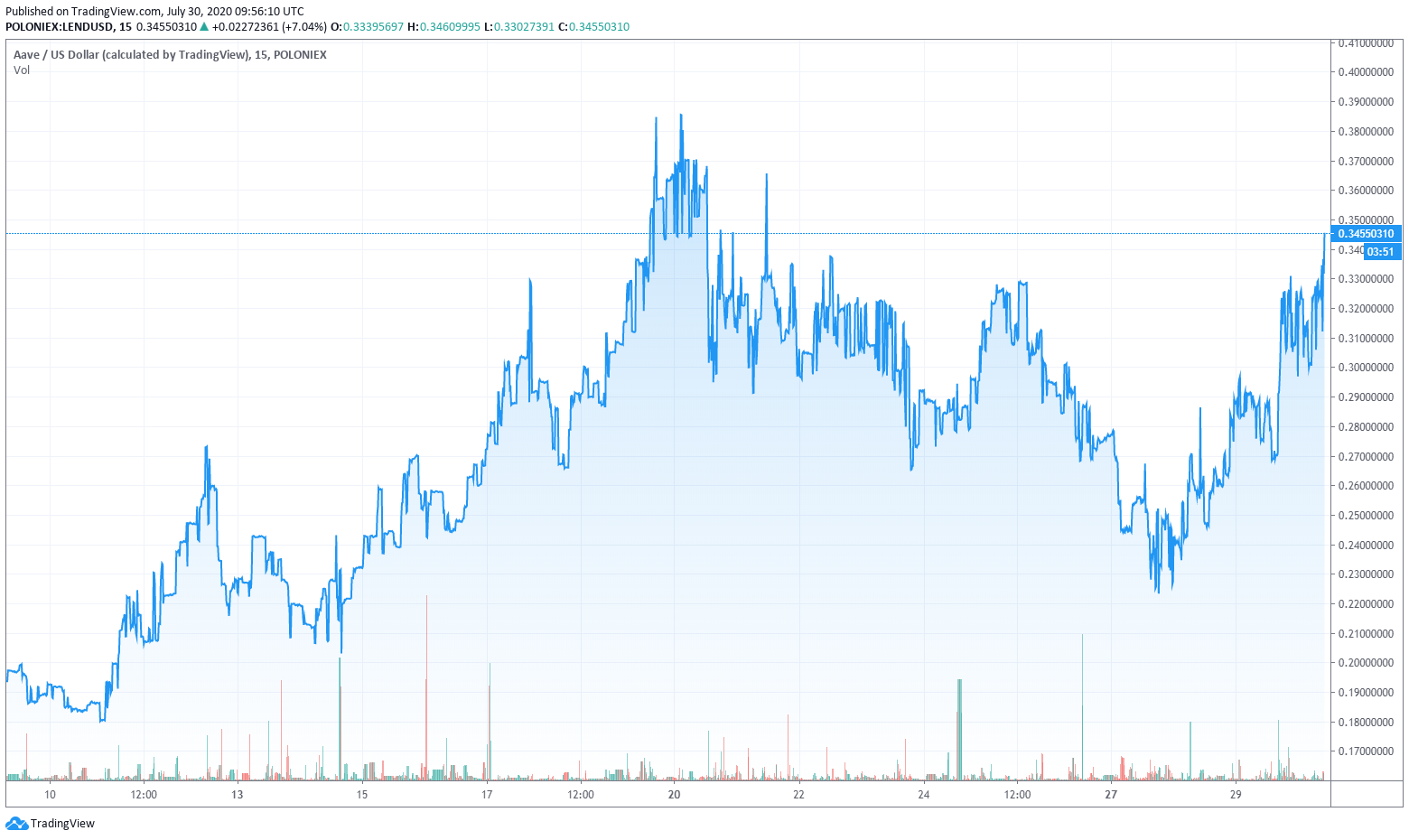 Currently, LEND ranks at 30 place by market capitalization and the project recently surpassed Compound (COMP) token to become the second most popular DeFi governance token after MakerDAO (MKR). However, LEND has yet to break its all-time high of $0.372 reached on July 19.

LEND has seen impressive gains as this altcoin has significantly outperformed Bitcoin in 2020 with 600% gains in the last 3 months. However, LEND is not alone.

At least 10 other DeFi-related tokens have risen by more than 100% in 2020, largely due to the hype created around yield farming and the growth of the DeFi sector.

With the new Aavenomics update, Aave will introduce several changes including a token swap that will see LEND tokens swapped for AAVE tokens at a 100:1 rate.

However, the most important update is the proposal for an incentive structure for AAVE token holders, who will either approve or deny this proposal. As DeFi protocols compete for liquidity, Aave will provide staking rewards to its users through liquidity and safety incentives.

“Stakers in the Safety Module will get fees from the Aave Protocol, Aave safety incentives, trading fees from the balancer pool + BAL reward. Liquidity providers will get liquidity mining incentives. All of this is up to governance discussion and approval.”

These staking rewards will be funded through the Aave token migration event which will allocate 3 million AAVE tokens for protocol incentives in the Aave Ecosystem Reserve.

According to Gustave, the community has been waiting for this update for quite some time. In fact, there’s a chance that the upcoming incentive structure has influenced LEND’s price surge over the last few months.

More than 30 star speakers including Raoul Pal, John Bollinger, Mike Novogratz, DataDash and Jon Najarian will gather on July 30th to discuss the challenges of crypto trading. Join the show for over 9 hours of crypto trading content!

Lindsay Lohan minted and sold her first non-fungible token.
The description for the digital collectible references Bitcoin and, perhaps, the Lightning Network.
Other celebrities have recently sold NFTs for charity.

The UK bank TSB is enforcing a ban on its customers sending money to two major cryptocurrency exchanges. Following through on vows made at the start of June.
Sponsored
Sponsored
The British institution will bar fund exchanges with both Binance and Kraken, amid financial crime concerns.