Bitcoin is stuck beneath $12,000. This stalling momentum comes after the cryptocurrency incurred an incredibly strong uptrend that had led it from lows of $9,000 to highs of $12,000 in a matter of weeks.

The cryptocurrency’s ongoing consolidation phase suggests that buyers don’t have enough buying pressure to shatter the resistance that sits just above where it is currently trading.

It may also indicate that buyers are losing their momentum.

Nonetheless, BTC is still just a hair away from closing above a crucial level that could allow it to “teleport” up towards $13,000.

At the time of writing, Bitcoin is trading down marginally at its current price of $11,730. This is around where it has been trading throughout the past several days and weeks.

It is essential to consider that BTC is currently in a multi-day consolidation phase directly after being caught within a strong bull trend.

This isn’t an uncommon occurrence within bull markets, and BTC could even dip lower while still maintaining its market structure.

The crucial level that buyers need to defend going forward sits at $10,500, which was previously a resistance level that had held strong for nearly a year.

If this level is broken below, it may negate the strength that Bitcoin has been incurring in recent weeks.

At the moment, it does not appear that any sort of sharp downtrend is imminent, as each dip over the past several days has been rapidly absorbed by buyers.

BTC Could Soon Teleport Higher as It Pushes Against Crucial Level

Despite its stalling momentum, Bitcoin is just a hair away from breaking above a crucial level that could lead it to see massive upside.

One popular cryptocurrency analyst spoke about this level in a recent post, noting that a close above the region between $11,800 and $12,000 could be all that is needed for BTC to “teleport” to $13,000.

“Weekly close above and you will witness an immediate teleportation to 13k,” he said. 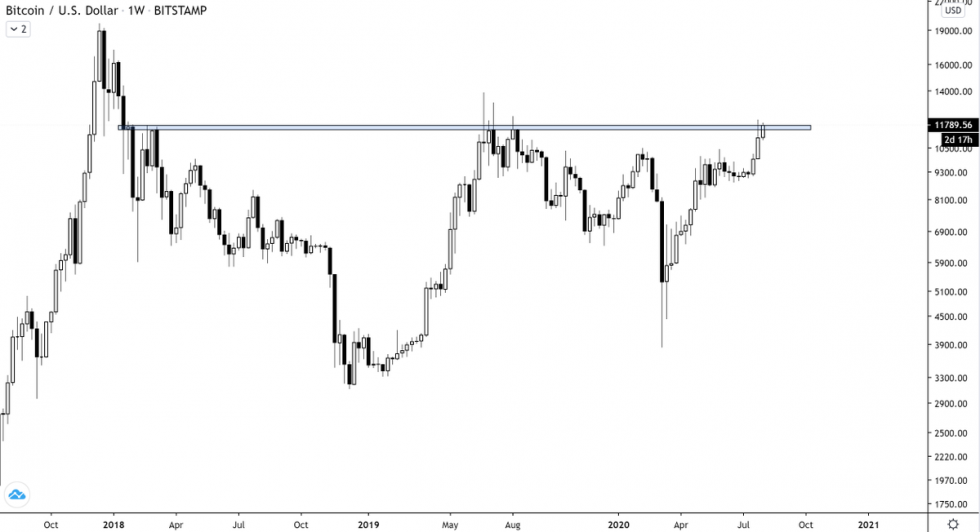 How Bitcoin trends heading into the weekend should provide investors will valuable insights into its mid-term outlook.

The founder of OKEx, Xu Mingxing, has been arrested according to local reports. According to Caixin, citing two sources, he was taken away by police a week ago.

On Monday, BlockFi mistakenly sent Bitcoin to users instead of stablecoins as part of a rewards promotion.
One user reported receiving a payment for 701.4 BTC rather than 701.4 GUSD.
The firm has attempted to recover the funds by halting user activities and threatening legal action.

The use of DLT can bring efficiencies to many aspects of the lifecycle of financial products, from listing and issuing, through to settlement of trades.