A common narrative that has cropped up in the crypto space is that Bitcoin is just tracing the price action of the stock market.

In June, a team of analysts at Wall Street bank JP Morgan said that since March’s crash,  “Cryptocurrencies have traded more like risky assets like equities—a significant change relative to the prior couple of years.”

This correlation has also been observed by some of Bitcoin’s bulls. Digital asset manager Charles Edwards posted a chart showing that when there is high volatility in stocks, BTC trades in tandem with them. 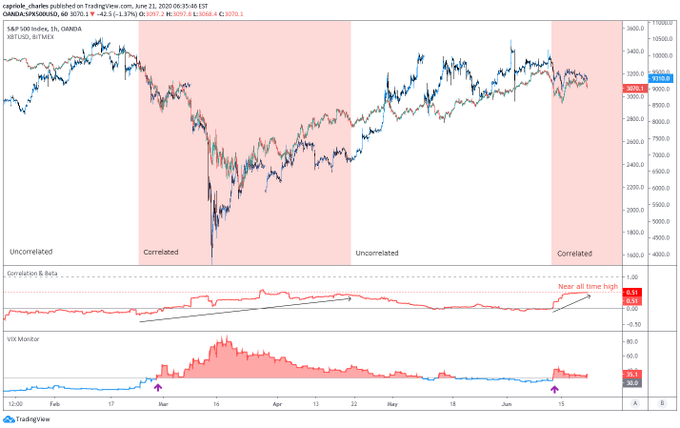 Chart of BTC’s price action along with the S&P 500 by Charles Edwards, a digital asset manager. Chart from TradingView.com

Unfortunately for Bitcoin bulls, then, the Nasdaq 100 index just printed a signal last seen at the top of the Dotcom bubble. This comes as sentiment on the state of the stock market has become increasingly bearish as the pandemic has continued.

According to financial research firm Sentimentrader, the Nasdaq 100 index just printed the exact same signal seen when the Dotcom boom ended in 2000: 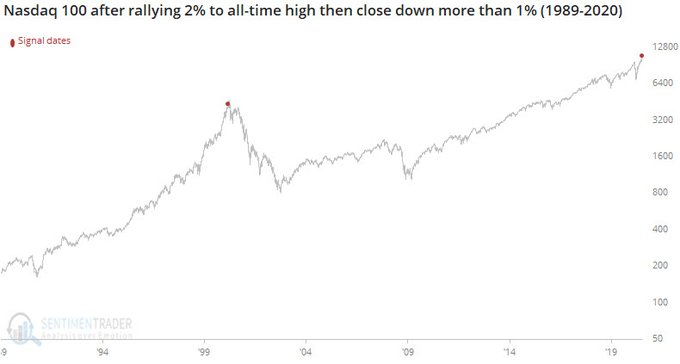 The expectations of a market reversal in the stock market, which is nearing/at all-time highs despite the pandemic and recession, have been corroborated. Prominent economist A. Gary Shilling said the following to CNBC in a recent interview:

“Stocks are [behaving] very much like that rebound in 1929 where there is absolute conviction that the virus will be under control and that massive monetary and fiscal stimuli will reinvigorate the economy.”

This has been echoed by investors like Jeremy Grantham and Scott Minerd. The former is a stock market trader that has called three market tops in the past few decades. And the latter is the global CIO of a Wall Street giant, who now expects stocks to potentially retrace by 50%.

All this is important to Bitcoin because should the stock market fall from here, crypto is likely to follow.

The Correlation Has a Silver Lining

With this correlation swinging Bitcoin from price level to price level, some have said that it diminishes BTC’s investment case. Goldman Sachs executives said in a client call that cryptocurrencies make little sense because they have unnatural and inconsistent correlations.

But according to Qiao Wang, the former head of product at Messari, the correlation between the stock market and Bitcoin has a silver lining:

“The stock-crypto correlation is the most annoying thing from a portfolio PoV. Diminishes the marginal benefit of owning stocks. Maybe should dump stocks and just hold gold+BTC.”

The stonk-crypto correlation is the most annoying thing from a portfolio PoV. Diminishes the marginal benefit of owning stonks. Maybe should dump stonks and just hold gold+BTC. One is risk-on other is risk-off but both are anti-fiat-debasement which is the only certainty in life.

He added that in a world with extremely high inflation, Bitcoin is likely to do better than stocks, only boosting the investment case.

How many investors will latch onto this narrative, though, remains to be seen.

Bitcoin (BTC) has been bouncing at the $51,000 support for the past 44 days. Typically, this would be interpreted as a positive occurrence, especially considering that the $50,000 level represents a 75% advance in 2021.

Every Friday, Law Decoded delivers analysis on the week’s critical stories in the realms of policy, regulation and law.
Editor’s note
Without breaking out the fanfare prematurely, it has been a red-letter week for crypto news.