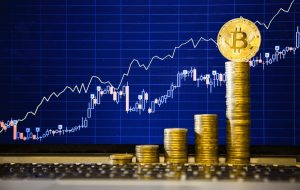 Bitcoin [BTC] price finally moved up across the board where a $250 rise in four hours seems like a lot. Nevertheless, there are other positive signals as well reinforced by this rise.

The CEO of Binance, Chanpeng Zhao, noted in a hysterical tweeted,

I am glad though. For a second there, I was worried that people may start to classify #bitcoin into a stablecoin. Who said volatility is bad?

The price of Bitcoin logs a high near resistance from the monthly high around $9450, as the market sentiments are at the edge looking for a decisive breakout. The CEO of the leading derivatives exchange, BitMEX, also commanded BTC to move in a comic tweet. The total number of short liquidation on BitMEX was nearly 27.8 million.

Bitcoin [BTC] Futures Volume (Source)The volumes on exchanges had been dropping considerably and in the absence of the positive catalyst whales finally seems to have moved the asset up. Moreover, the uptrend in gold and silver along with the strength in the stock market seems to be reinforcing bullish sentiments.

While it is a little early to say now before we see clear consolidation above the trendline, the price seems to be breaking above the long-term bearish resistance on a weekly scale. The closing in the next couple of week will be instrumental. Moreover, this is the 12th week of consolidation near resistance.

The trendline is inspired by Peter Brandt’s elephant signal back in March. The downtrend since 2017 high is been instance below this resistance for the past 2.5 years.  Another perspective of the long-term breakout was shared by Raoul Pal. It suggests a bullish flag formation on the logarithmic scale.

Furthermore, according to leading Bitcoin trader, Josh Rager, the follow levels could act as resistance for the bulls in this run. He tweeted,

About time we get some price action around here

Do you think it is a fake bounce for a bull trap or the beginning of a real bull run? Please share your views with us.

Bitcoin is trading up 0.2% while the S&P 500’s futures are trading down 0.4%, as of this article’s writing.
Despite the slight drop, the index remains in a textbook bull pattern primed to end in a strong upwards breakout.

Crypto exchange FTX launched Coinbase Pre-IPO tokens (CBSE) this morning as part of its Tokenized Stocks product line, the firm said in an announcement.
The tokens have seen over $2 million traded in the past hours and are currently being traded for $231.