In the month of August, Bitcoin (BTC) has attempted to break the $12,000 resistance zone on four occasions. Two of the four attempts have been in the last 48 hours with Bitcoin pushing as high as $11,984 and $11,977 respectively.

With respect to the latter price level, Timothy Peterson of Cane Island Alternative Advisors has stated that the odds of Bitcoin reaching $17k during the remainder of 2020 currently stand at 30%. Mr. Peterson made the comments via Twitter and was responding to an article that suggested that a BTC break above $12k would guarantee a push towards $15k – $17k. Below is his Tweet providing the odds for Bitcoin.

Odds of #bitcoin reaching $17,000 any time during the remainder of the year are about 30%. https://t.co/COeHIwV5gZ

Also to note, is that the $17k price was also an area of interest in MagicPoopCannon’s analysis of Bitcoin back in mid-May.

What Next for Bitcoin in the Crypto Markets?

As earlier mentioned, Bitcoin has attempted to break the $12,000 price ceiling on four occasions in the month of August. As a result, Bitcoin’s price movements have been printing an ascending triangle as seen in the screenshot below. 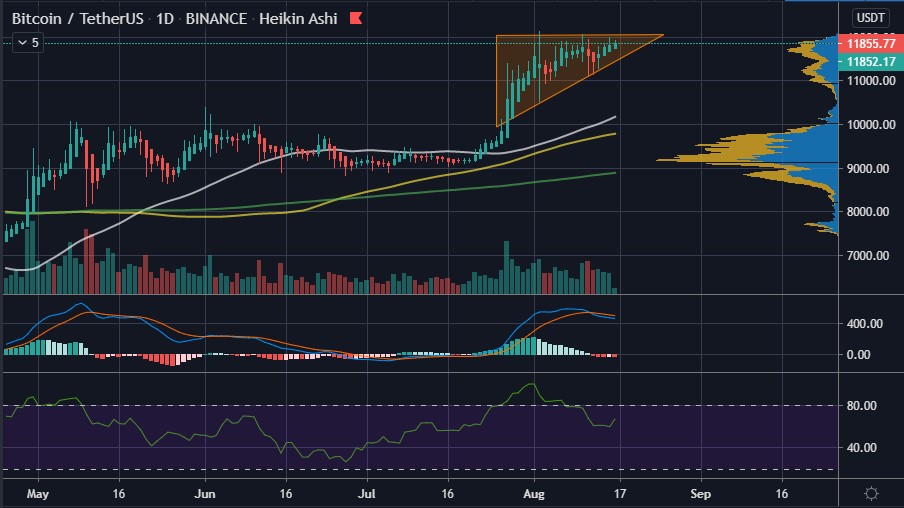 Further analyzing the daily BTC/USDT chart above, the following can be observed.

Massachusetts Mutual Life Insurance Co. has become the latest institution to invest in Bitcoin. The almost 170-year-old financial services company just took up a $100 million position in the digital asset.

This year is shaping up to be the start of major institutional interest in Bitcoin.

Solana crashed due to a denial of service yesterday.
The network is now processing blocks, but some applications in the ecosystem have not yet recovered.
SOL could target $207.50 as optimism returns.