Bitcoin (BTC) saw fresh gains on Aug. 6 as bulls refused to rest and the price steamed toward $12,000.

With barely any let-up, Bitcoin has recovered almost all its lost ground over the course of this week, just four days after it shed $1,200 in minutes after initially passing the $12,000 mark.

With its latest move, the largest cryptocurrency thus beat out resistance earmarked by analysts as the next hurdle for bulls.

“Let’s see how it goes from here.”

All eyes will be on the ability for bulls to flip the precarious $12,000 level into solid support, something which nonetheless came easily for $11,000 once resistance at $10,500 was broken.

Data from on-chain monitoring resource Skew confirmed the trend this week, with one-month realized correlation between gold and Bitcoin now at 67.1%.

The transformation has been impressive — just three weeks ago on July 20, a local low saw realized correlation hit -0.1%. 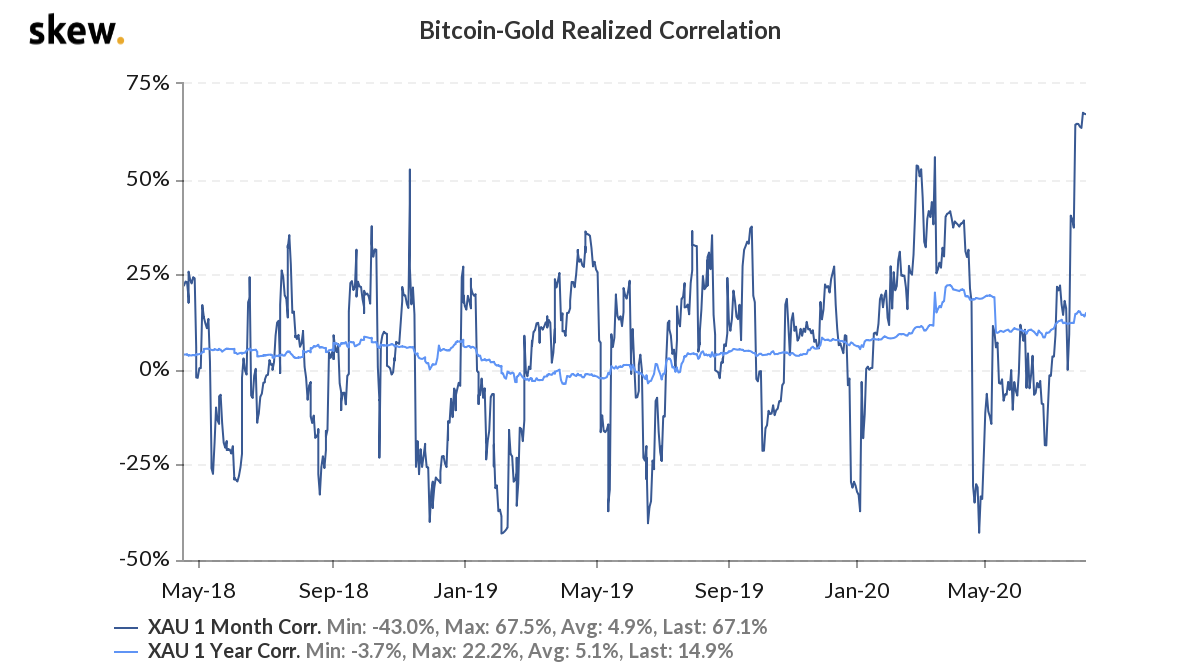 The intervening period has been marked by Bitcoin’s rapid gains in USD terms, following in gold’s footsteps several months after the precious metal began its own conspicuous climb.

At press time on Thursday, XAU/USD was at $2,065, its highest ever against the dollar, passing $2,000 despite analysts predicting the likelihood of such an event being just 30% this year.

Meanwhile, doubts are surfacing over Bitcoin’s continued correlation with stock markets. BTC was 95% correlated with the S&P 500, for example, but on Thursday, one analyst declared the relationship to be over.

It has been a rough day for Bitcoin, with the benchmark cryptocurrency seeing intense turbulence that has caused its price to oscillate between highs of $11,600 and lows of roughly $11,100.

Amaury Sechet, the lead developer of Bitcoin Cash (BCH), has announced new plans for the network’s coming November upgrade designed to find a compromise between proponents of the ‘Bitcoin ABC’ and ‘BCHN’ proposals.

Chainlink’s price is up more than 20% over the past 24 hours.
Despite the significant gains incurred by the coin, LINK must slice through the $24 resistance to advance further.
Failing to do so may generate panic among investors, leading to a steep correction towards $17.