Mohit Sorout — a founding partner of Bitazu Capital — sees new all-time highs for Bitcoin in the near future.

On August 5th, he shared the chart below to his Twitter following, writing: “This $btc chart is legit giving me ATH vibes.” The chart shows that the volatility of the leading cryptocurrency is reaching a macro inflection point last seen at the 2019 price bottom.

This period of low volatility suggests that Bitcoin will soon see a macro breakout, potentially in the upward direction. 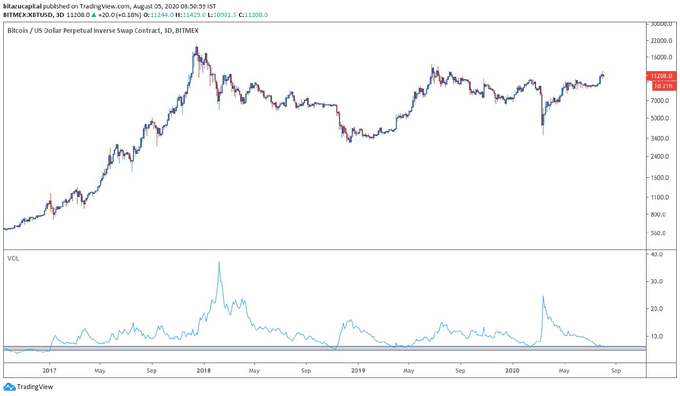 Not the Only One That Thinks So

Sorout is far from the only fund manager in the space that thinks Bitcoin will soon set new all-time highs.

Factoring in fundamentals, there are many prominent cryptocurrency analysts and investors that are anything but bearish.

Mike Novogratz, the founder of Galaxy Digital, told CNBC in an interview the other week that he thinks BTC will hit $20,000 in 2020. He attributed his comment to the ongoing money printing by central banks, arguing that the narrative is driving booming interest in gold and cryptocurrency:

“Great bubbles usually end with policy moves. It doesn’t look like the Fed is going to raise rates … The liquidity story isn’t going to go away. We’re going to get a big stimulus… A lot of that retail interest shifted to the story stocks, to the tech stocks, because they were just more fun. Yesterday you saw a lot of money shift back over to gold and bitcoin. There’s an adoption game in bitcoin that you don’t have in gold. But I like them both.”

This sentiment was echoed to a T by Dan Morehead and Joey Krug of Pantera Capital.

In a March newsletter, the investors at the cryptocurrency fund said that simply speaking, what happens when central bank prints money is assets go up in value. Bitcoin is no exception to that rule.

“As governments increase the quantity of paper money, it takes more pieces of paper money to buy things that have fixed quantities, like stocks and real estate, above where they would settle absent an increase in the amount of money. I think they will do that. The corollary is they’ll also inflate the price of other things, like gold, bitcoin, and other cryptocurrencies.”

They added that BTC could achieve this new all-time high in the 12 months after their March post, citing the time it takes for institutions to rebalance and analyze portfolios.

After years of unclear crypto regulations, the country is finally moving towards codified digial asset laws.

Five Years of Ethereum: From a Teenage Dream to a $38B Blockchain

It would seem that five years is a relatively short time for an information technology company, but Ethereum has made colossal progress during this time, growing from its own initial coin offering project to the largest blockchain platform, running about 2,000 decentralized applications.

Typically every two years markets get attention as the media looks to them for insights in United States election cycles, after which volume drops precipitously and mention of their prices vanish from the mainstream press.