As of the time of this article’s writing, LINK is trading at $7.50, around 16% below its recent all-time high of $9. Analysts think the asset has further to drop despite the already strong correction.

According to a Telegram group tracking occurrences of the Tom Demark Sequential “9” candles in markets, Chainlink just printed a sell signal against Bitcoin. “LINK/BTC Sell 9 Weekly,” the Telegram group wrote in reference to the chart below.

Tom Demark Sequential “9” candles are seen at inflection points in the trend of an asset. The signal has marked previous highs in LINK’s uptrends, as can be seen in the chart below. 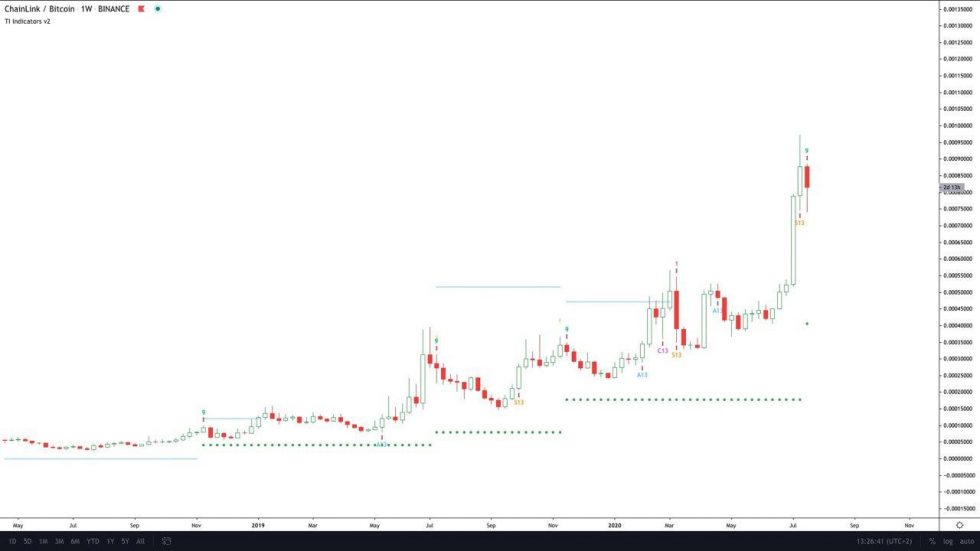 This bearish signal comes as other indicators have suggested that Chainlink will be subject to a deeper pullback. One trader, for instance, said that LINK’s volume composition suggests the asset is undergoing a “blow-off top.”

LINK’s correction comes as one of its competitors has been rallying off the back of positive fundamental developments. This competitor is Band Protocol (BAND), an oracle solution that is backed by Silicon Valley giant Sequoia and Binance.

BAND is up by approximately 300% in the past 30 days, having benefited from partnerships with ICON Protocol, Math Wallet, and Waves Protocol.

All Altcoins Could Suffer

Although Chainlink is the topic of focus for this article, traders believe all altcoins may underperform BTC in the weeks ahead.

The head of technical analysis at Blockfyre, a crypto research firm, commented earlier this week:

“If $BTC and $ETH start trending. I’d be cautious on longing #ALTS. Especially if this is the start of a new BTC trend upwards. The most likely out come would be alt/btc pair ratios getting drained while BTC moved past 10.5k in that scenario. I also wouldn’t look to fade 1st move.”

Another market commentator shared a very similar sentiment earlier this month. They commented that with extremely low volatility in the Bitcoin market, the impending breakout is likely to end the “altcoin party” that has transpired.

As reported by Bitcoinist previously, these traders are part of the camp that believes altcoins will struggle to outperform if Bitcoin is either in a bull or bear trend. Chainlink, of course, is not excluded from the umbrella term of “altcoins.”

Ray Dalio is traditionally not a big fan of Bitcoin.
The investor today said it could be a “diversifier to gold.”
However, he still prefers gold to Bitcoin.

Maybe famed investor Ray Dalio is softening his stance on Bitcoin, if only just a little.

The CEO of budget airline Ryanair is the latest celebrity whose likeness has been used to promote a fake Bitcoin auto-trading scheme, similar to those that have exploited stars as diverse as actress Kate Winslet and billionaire Sir Alan Sugar.

John McAfee, the founder of the antivirus software company of the same name, is one step closer to facing prosecution in the United States for tax evasion.
In a ruling released today, the Spanish National Court approved the extradition of McAfee to the United States. The U.S.