Cryptocurrency ranking resource CoinMarketCap is facing a backlash after listing Chainlink (LINK) as the biggest DeFi token by market cap.

The website’s new DeFi section lists what executives consider to be the most important altcoins in the space, which is seeing considerable interest from traders and investors.

Speaking to Cointelegraph, CoinMarketCap said that it employs “strict methodology” in order to determine if a particular token qualifies as “DeFi” and is therefore eligible for inclusion in its rankings.

Chainlink, a smart contract platform, is however an unlikely addition — following the section’s launch, various commentators argued that LINK is not strictly a DeFi token.

“Chainlink is now the number 1 defi token thanks to coinmarketcap deciding its a defi token and adding it to the list,” analyst and speaker Jason Fernandes wryly tweeted on Monday.

“Tune in next week when Binance coin becomes the second biggest defi token.”

DeFi, or “decentralized finance,” has formed something of a craze in trading circles this year, reminiscent of similar attention paid to stablecoins and ICO tokens in previous years.

As Cointelegraph reported, suspicions have accompanied the rise of the phenomenon, with multiple tokens seeing huge gains — and losses — over short timeframes. 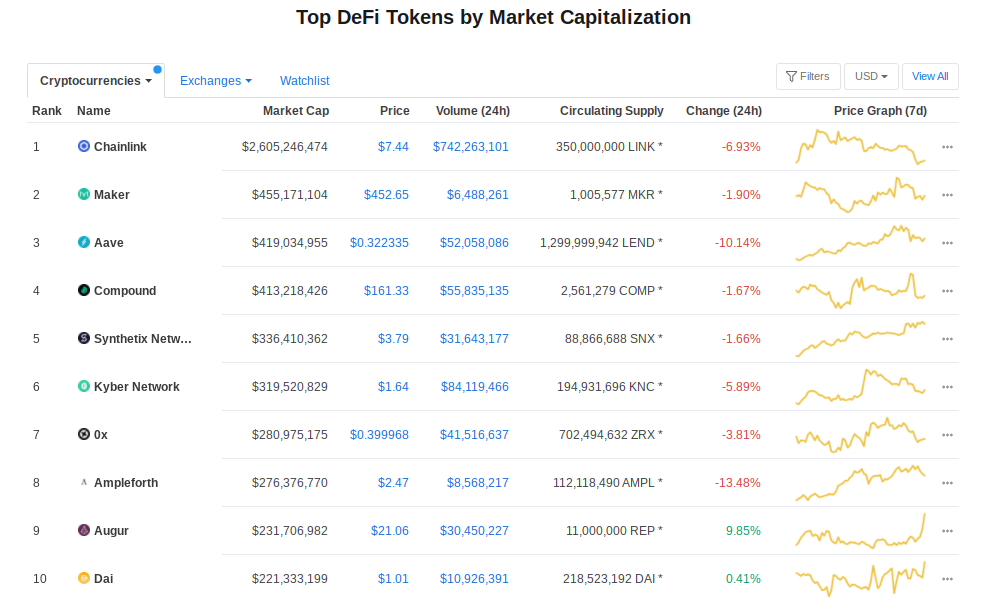 Continuing, CoinMarketCap strongly denied any idea that its rankings were fixed or that its methodology was biased.

“The criticism that ‘Chainlink may have paid CMC to get this category up’ is baseless and unfounded,” it said.

“We refute any suggestion that a project was behind the creation of our classification page, and we once again stress that CMC has never received any compensation towards the listing of any token or exchange.”

It added that Ether (ETH) was also left out of the list due to not conforming to its methodology.

CoinMarketCap is no stranger to controversy. Last month, adjustments to rankings caused an outcry, not only for tokens but for other components of the cryptocurrency ecosystem, such as exchanges.

The prospect of regulatory scrutiny and more volatility is diminishing Bitcoin’s claim to rival gold as a portfolio hedge.
Analysts said that recent plunges of 30% had been a wake-up call for investors.