As the US dollar index started declining from its March 2020 top, Bitcoin price exploded.

It was because of the Federal Reserve. The US central bank on March 23 decided to offer more than $3 trillion in loans and asset purchases to aid their economy through COVID-induced lockdown. It also lowered the benchmark interest rates close to zero, making it easier for borrowers to obtain cash cheaply.

Four months later, the market is now looking at a more substantial Bitcoin and a weaker US dollar. The top cryptocurrency is up more than 185 percent from its mid-March nadir. Meanwhile, the greenback is trading slightly above its two-year low. The move signaled a lesser demand against the Fed’s abundant cash supply into the economy. 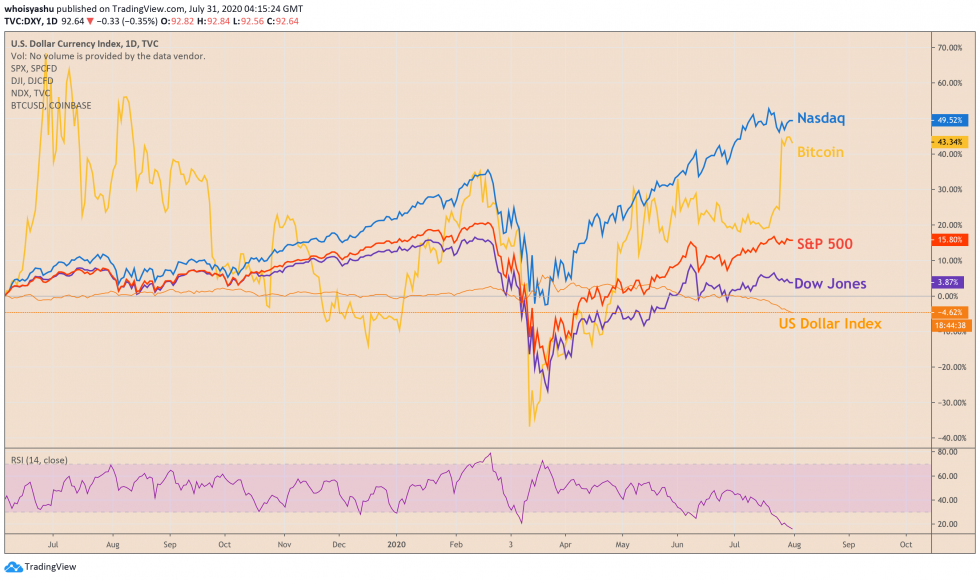 Riskier asset/indexes, including Bitcoin and Dow Jones, rose against a falling US dollar index. Source: TradingView.com

The market now expects more declines for the US dollar after the conclusion of the Fed’s two-day policy meeting on Wednesday.

The committee said it would continue supporting the economy with the same easing policies as they were. The same day, strategists at Goldman Sachs noted that the Fed’s decision would put the US dollar at risk of losing its global reserve currency status. They added that fears of fiat-induced inflation would lead investors to gold.

“Gold is the currency of last resort, particularly in an environment like the current one where governments are debasing their fiat currencies and pushing real interest rates to all-time lows,” the Goldman strategists wrote.

They ignored Bitcoin, an asset that claims to be a digital version of gold. Nevertheless, Bitcoin’s backers jumped ahead and filled the social media with bullish narratives. Part of the reason was the cryptocurrency’s immediate rise from $9,300 towards $11,500 against the fears of inflation.

The $DXY (U.S. Dollar Currency Index) has broken down from a ~9 year uptrend.

And you’re still bearish on #Bitcoin?

One must not just chart $BTC alone and come to your macro conclusions, there is usually so many other factors at play pic.twitter.com/inyH2bngP7

But as people start holding Bitcoin in anticipation that it would protect them against inflation, another Goldman Sachs executive believes there won’t be a weaker US dollar.

Sharmin Mossavar-Rahmani, the chief investment officer of private wealth management at Goldman Sachs, said that dollar would maintain its top position in the global currency hierarchy.

“The dollar can cheapen a little bit because it’s moderately overvalued but that doesn’t mean that it’s going to be debased, that we are going to have huge inflation and that gold is a good substitute,” she told CNBC in a Thursday interview.

Mossavar-Rahman noted that assets like gold neither generate any income nor support economic and corporate growth. That somewhat put Bitcoin under similar criticism, a scarce cryptocurrency that–more or less– operates as a speculative investment.

Ever wondered how much cryptocurrency Wall Street veteran Mike Novogratz owns (or at least owned)?
In a recent podcast, he recently answered this question and also revealed his thoughts about the Bitcoin and broader crypto market.

Core Scientific placed an order of over 58,000 Bitmain S19 Series Antminers on Dec. 17.

With this purchase, Core Scientific becomes the largest mining hosting provider in North America. In total, Core Scientific has ordered over 76,000 S19 and S19 Pro Antminers since August 2019.

Bitcoin Looks Structurally Similar to Start of Rally to $20,000: Analyst

Despite the surge over the past few weeks, not all analysts are convinced Bitcoin is in a full-blown bull market.
There remain commentators who argue that this move may just be a range deviation before a move back to the $9,000s, then lower.