Ethereum has been stable within the upper-$300 region for the past few days. Buyers and sellers appear to have reached an impasse as it hovers just below $400.

Whether or not it is able to surmount this level in the near-term may depend largely on how Bitcoin and the aggregated market trend next.

Like ETH, BTC is also pushing up against high time frame resistance at $12,000. So far, this level has been insurmountable for the benchmark crypto.

One analyst is now noting that although he expects Ethereum to climb significantly higher in the coming days, it is possible that it will first see a massive decline that resets sentiment and traps short positions.

At the time of writing, Ethereum is trading sideways at its current price of $397. This is around where the cryptocurrency has been trading at throughout the past couple of days.

This ongoing consolidation pattern comes as the crypto remains caught within a strong uptrend, although it remains slightly below its recent highs of $415 that were set this past weekend.

One respected trader recently explained that he is expecting ETH to see a sharp downside movement in the near-term – but it may be bullish for its mid-term outlook.

“Still expecting an ETH scam wick that hits back to around $275. It would cause maximum damage. Liquidate longs who have added to their position post 250 break, plus create cocky bears who get trapped in their greed as it almost immediately recovers.”

Could This “Scam Wick” Help Lead ETH Towards $750?

The same analyst explained in a later tweet that although he anticipates some short-term downside, he still believes that a move up towards $750 is imminent in the days and weeks ahead.

While looking at its BTC trading pair, he notes that Ethereum has held a crucial support level that opens the gates for significant upside. 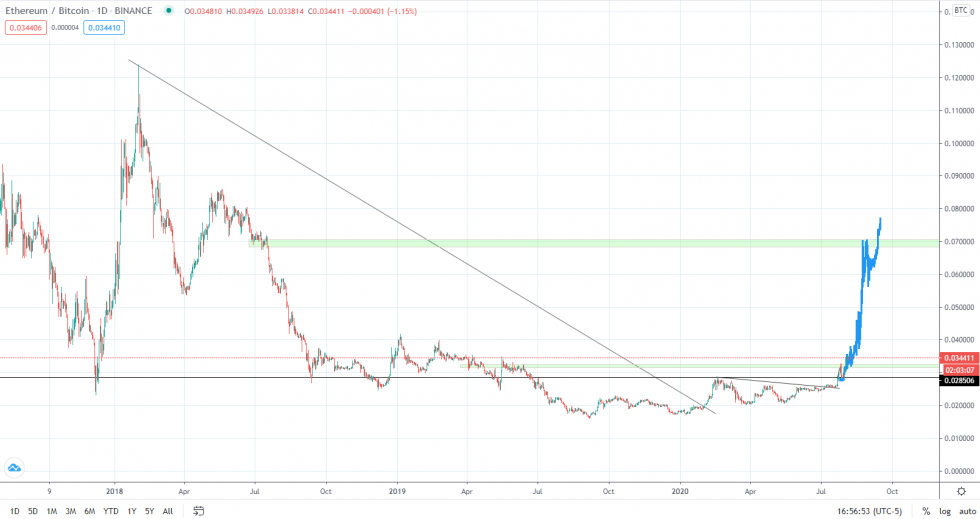 If this trader’s forecast for Ethereum’s path forward comes to fruition, it’s going to be a rocky few months for the cryptocurrency.

It was once said that the internet would make it possible for anyone with 1,000 fans to make a living, but Li Jin believes that in the age of NFTs, one or two serious supporters may be enough.

South African regulators are seeking to exercise more control over cryptocurrency trading following the collapse of what was alleged to be the largest Ponzi scheme the country has ever seen.