As reported by Twitter user Metallic Elmo, scrolling text appeared behind players at the series of soccer matches on July 26.  “HEX price went up 11,500% in 129 days,” the ads stated, directing viewers to visit the ERC-20 token’s website.

User hexhivist posted a photo of the same phrase on a HEX advertisement on the side of one of London’s famous red double-decker buses. This ad stated the token was a “high interest blockchain time deposit.” The official HEX twitter account posted pictures of wrapped taxi ads, and HEX has taken out newspaper ads too. 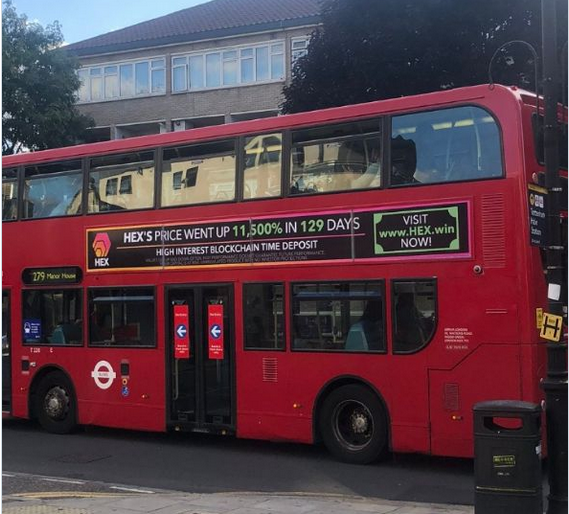 Many in crypto believe HEX is a ‘scam’

Many in the crypto community are extremely wary about the token due the high rates of returns, which are often associated with Ponzi schemes and investment scams. Some on social media compare HEX to the notorious Ponzi scheme Bitconnect.

“Recently asked a family member in London to pick up one of the HEX adds in the newspaper. He got back to me saying it was a scam after he googled it. In other words, new potential onboarders are seeing scam right from the get go. This is going to kill HEX unless something is done.”

Prior to February, the value of HEX was so small, many crypto sites simply couldn’t measure it. However, the token now has a market capitalization of more than $1.5 billion according to CoinMarketCap, an increase of $500 million in two months. The token is currently near its all-time high, priced at $0.0057 and ranked #201 by CoinMarketCap.

The number of exchanges offering trading on HEX has doubled from 9 to 18 since May. Ethereum decentralized exchange Uniswap shows the 24-hour volume for HEX was $774,000, while on HomiEx it was close to $243,000.

“Crypto Cowboy” Tyler Lindholm is joining Cynthia Lummis’s senior staff.
Lummis just won a US Senate seat, the first woman from Wyoming to do so.
Both Lummis and Lindholm are big fans of Bitcoin.

Bitcoin just dove $1,400 in the past five minutes as bears have seemingly re-entered the cryptocurrency market. The digital asset hit $10,600 at the lows and has since rebounded to $11,100 as countless traders have bought the dip as per their Twitter fees.

BestChange.ru, a major cryptocurrency website in Russia, has got blocked shortly after local lawmakers finally passed the country’s crypto legislation.
An aggregator of about 400 local crypto exchange websites, BestChange.ru website was blocked by Russian telecom regulator Roskomnadzor on Aug. 26.