Despite positive fundamental trends, not all involved in the cryptocurrency industry are bullish on Bitcoin.

Take the example of Peter Schiff, the CEO of Euro Pacific Capital, who recently said that BTC is likely to fall below $9,000. As reported by Bitcoinist, Schiff wrote:

Gold seems to be chipping away at resistance just below $1,800 while Bitcoin is simultaneously chipping away at support just above $9,000. I expected both resistance and support to give way, with #gold surging as #Bitcoin collapses. What do you think will happen?

An on-chain analyst, though, recently suggested that one crucial on-chain trend is making it almost irrational not to be bullish on BTC.

Despite volatile price action, a majority of Bitcoin in circulation remains inactive. According to data from Glassnode, a blockchain analytics firm, the percentage of coins not moved has reached 62% — an all-time high.

This comes in spite of the fact that 77% of the Bitcoin supply was accumulated at a price lower than current. That’s to say, 77% of all BTC can currently be sold for profit.

To Rafael Schultze-Kraft, the CTO of Glassnode, the confluence of high profitability amongst investors and increasing levels of holding is bullish.

“BTC supply not moved in over a year: 62%. BTC supply in a state of profit: 77%. Read: Many investors could be profitably cashing out, but instead choose to hodl. How can you not be bullish on #Bitcoin.” 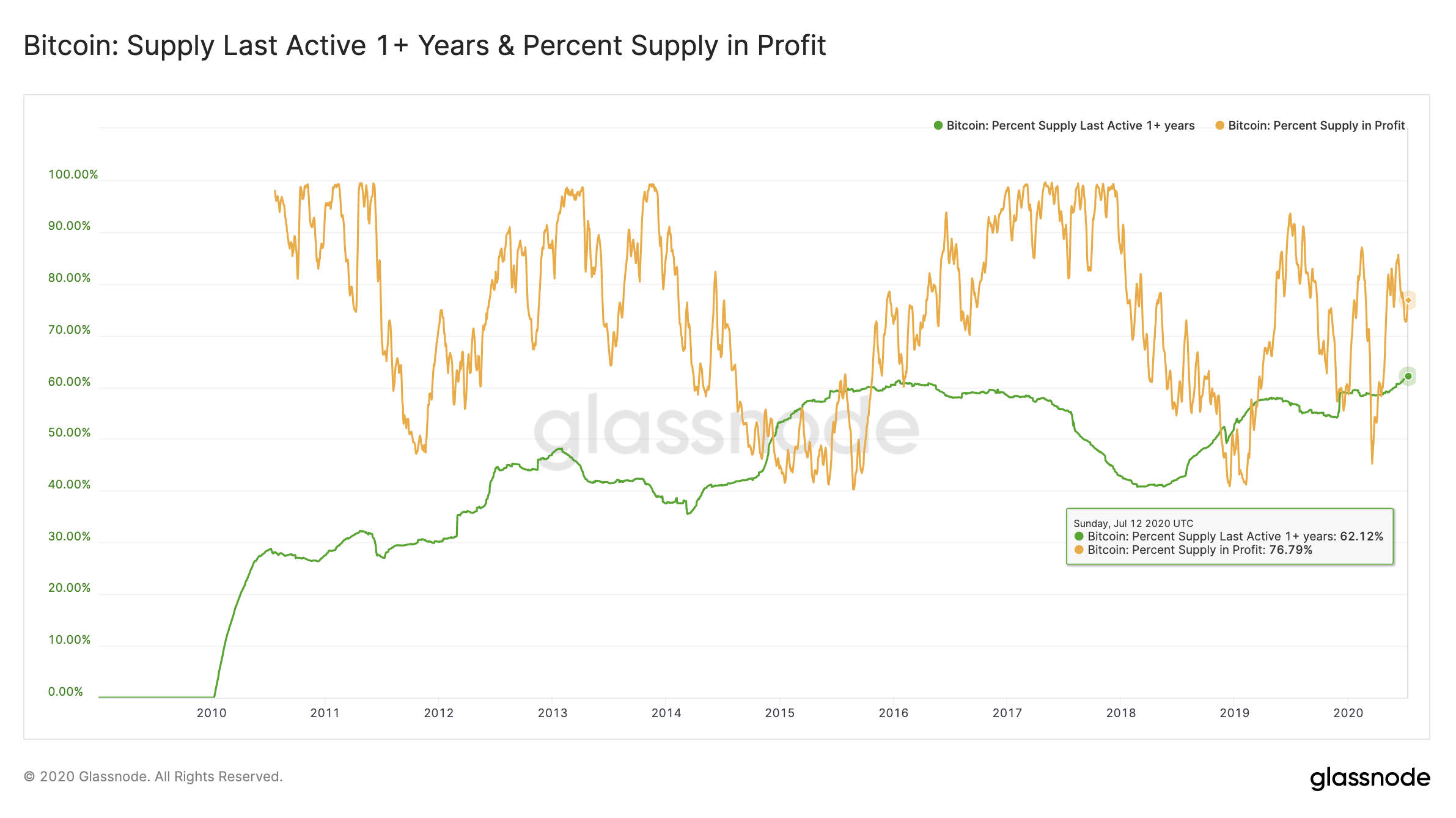 Chart of percent of BTC’s HODled supply (1 year+) and the percent of the supply in profit from Rafael Schultze-Kraft (@n3ocortex on Twitter).

Not only does this indicate conviction amongst investors, but it also indicates there is decreasing potential sell pressure.

Other metrics corroborate the trend of HODLing amongst Bitcoin investors.

Prominent gold bull and crypto skeptic Peter Schiff recently conducted a Twitter thread where he asked his followers and crypto community about their conviction in holding Bitcoin. As can be seen, many responded saying they will hold BTC for years.

This quiz is for Bitcoin HODLers. How much longer does the price of #Bitcoin have to stay below $10,000 before you will throw in the towel and sell?

Schultze-Kraft also published 12 on-chain indicators suggesting levels of “HODLing” are nearing or are at all-time highs, boosting the bull case.

PlusToken and Miners Could Negate Positive

Although data suggests that by and large, more and more Bitcoin is being held for the long run, there are still sources of sell pressure. Two of these sources are PlusToken, the crypto Ponzi scheme that purportedly accumulated billions of dollars worth of Bitcoin, and cryptocurrency miners.

Over the past few weeks, blockchain analytics firms and crypto analysts have noticed that addresses affiliated with the scam have begun to shuffle their assets. These assets include millions of dollars worth of Bitcoin, Ethereum, XRP, and EOS. Some reports suggested around $450 million is being moved, potentially to exchanges to be sold.

In the DeFi world, Yearn.finance distribution concluded – what’s next for YFI?

YFI, the governance token of Yearn.finance, is the fastest DeFi growth story in the history of cryptocurrencies. Within a week, the token accomplished more than what most cryptocurrencies fail to achieve in years.

Lawyers acting on behalf of Craig Wright, who says he invented Bitcoin, have asked Square to stop hosting the Bitcoin white paper.
COPA, an organization looking to protect against this sort of thing, has written a response for Square.
“We don’t care who created Bitcoin,” said Square.

In the history of every successful startup, there comes a ‘defining moment, a moment when the vision of its founders clashes with the impossible and, against all odds, triumphs by becoming a reality.