Ampleforth (AMPL) is a cryptocurrency built with an elastic supply that expands and contracts depending on demand. According to its co-founder Evan Kuo, the team was trying to learn from the failures of the gold standard and Bitcoin (BTC) to create a more flexible monetary system.

Although many in the crypto space perceive the finite inelastic supply of Bitcoin and gold as a major advantage over fiat, Kuo disagrees:

“The only problem with gold arises when you start to use it as a base money or building block as part of a financial infrastructure.”

Since Kuo perceives Bitcoin as digital gold, the same problems apply. As demand goes up, the price increases and if in addition to that, the population expects future price increases, they start hoarding the asset. This leads to a deflationary spiral. Ampleforth is designed with an elastic, automatically adjustable supply. Once a day, the supply either gets automatically expanded or contracted depending on the level activity in the past 24 hours.

The total supply is also adjusted, although each holder’s proportional stake does not vary. The equilibrium price target is set to one 2019 Consumer Price Index adjusted dollar. Kuo acknowledged that it is unlikely that AMPL will become a stablecoin in the near future:

“And so it is true that we do have this price target and is also true that in the long run, this will potentially become much more stable. But it’s not at all a near-term goal or measure of success.”

According to Kuo, one of the main goals of this design was to create an asset that would be uncorrelated with traditional assets and Bitcoin. Although historically, Bitcoin and other crypto assets have exhibited low correlations with traditional assets, every major crypto has been tracing Bitcoin’s path. This presents a challenge to crypto investors as it is impossible to achieve diversification with highly correlated assets. 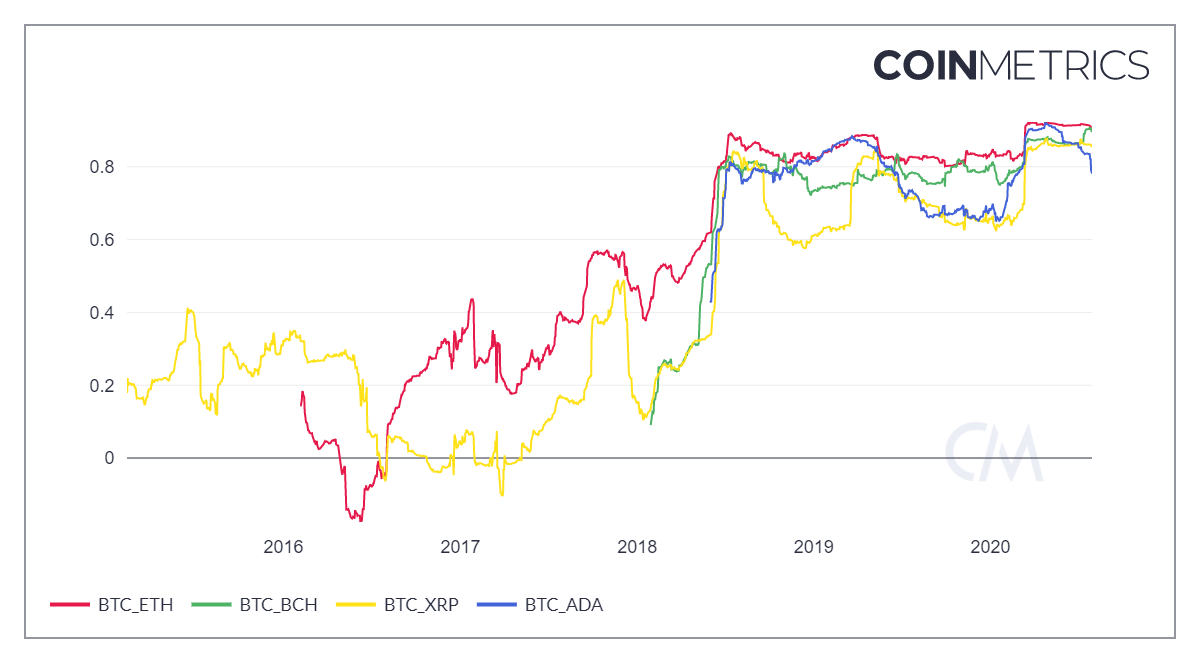 Correlation between Bitcoin and other top cryptocurrencies. Source: Coin Metrics.

We calculated a simple Pearson correlation between the prices of Bitcoin and AMPL and it stands at 0.1, which is very weak.

Investors may lose money as price goes up

One interesting outcome of Ampleforth’s design is that an investor needs to assess their investments differently. Normally, if a portfolio asset goes up in price, you make money (with some derivatives it may be the opposite). With AMPL, this may not be the case.

Let’s say an investor owns 10 AMPL that they acquired for $1 each, making their portfolio worth $10. The price then increases by 10% to $1.10, but the supply contracts 50%, decreasing the investor’s holdings to 5 AMPL. Despite the price appreciation, the investor’s portfolio diminishes to $5.50, losing 45% of its original value.

One possible strategy would be to “front run” the daily adjustment by analyzing the data and anticipating the direction of the upcoming change. Kuo admitted that this could be a viable strategy, but it is not without its caveats:

“You also have to remember that everyone else also has the data themselves, so it’s game theoretic. And yes, that strategy certainly is a good strategy. I mean, it’s an interesting strategy. <…>. But it is not without risk because you’re making a bet.”</…>

Kuo believes that AMPL (which he calls “oracalized money”) may present new opportunities to the DeFi space because of its unique properties. These opportunities do not have to be limited to Ethereum (ETH); according to Kuo, the team has considered AMPL a “multi-chain” asset from the beginning.

Digital asset financial services firm BitGo is applying to become a qualified cryptocurrency custodian in New York state.
In its announcement on Aug.

Ethereum is up more than 180% since March 2020 lows, but data from the blockchain suggests the world’s second-most popular digital asset may have further to climb.

Why Cryptocurrency Is More Than a Hedge Against US Dollar Inflation