Coming every Sunday, Hodler’s Digest will help you track every single important news story that happened this week. The best (and worst) quotes, adoption and regulation highlights, leading coins, predictions and much more — a week on Cointelegraph in one link.

This week, Twitter and Bitcoin suffered a PR disaster. In a coordinated, ambitious attack, about 130 high-profile accounts were hijacked. Top celebrities, entrepreneurs, politicians, businesses and crypto exchanges were affected. Many posted similar tweets that promised followers that Bitcoin payments sent to a specific address would be doubled. Fraudulent messages were speedily deleted — but on some profiles, such as Elon Musk’s, they quickly reappeared again. Twitter had little choice but to suspend all verified accounts as it struggled to get on top of the breach. It’s estimated the attackers received 375 payments worth $120,000 as a result of the attack, with one Japanese wallet sending $40,000 in BTC. Blockchain intelligence firms have said some of the crypto has been moved and sent through mixing services, and the FBI has launched an investigation.

The attack has been described as a threat to national security. We still don’t know whether the criminals managed to access sensible information found in direct messages. It seems the scammers were able to succeed with their audacious hack because employees have high levels of access to information and control on the platform. Twitter has vowed to add more security measures in an announcement that smacks of closing the stable door after the horse has bolted. Tron founder Justin Sun is offering a reward of $1 million to those who track down the attackers. Early detective work suggests the hackers aren’t sophisticated Bitcoin users as they left trails leading to and from major exchanges that presumably hold the keys to their identities. Research from Whitestream indicates they appear to be consolidating their funds to an address that had earlier sent money to BitPay and Coinbase. 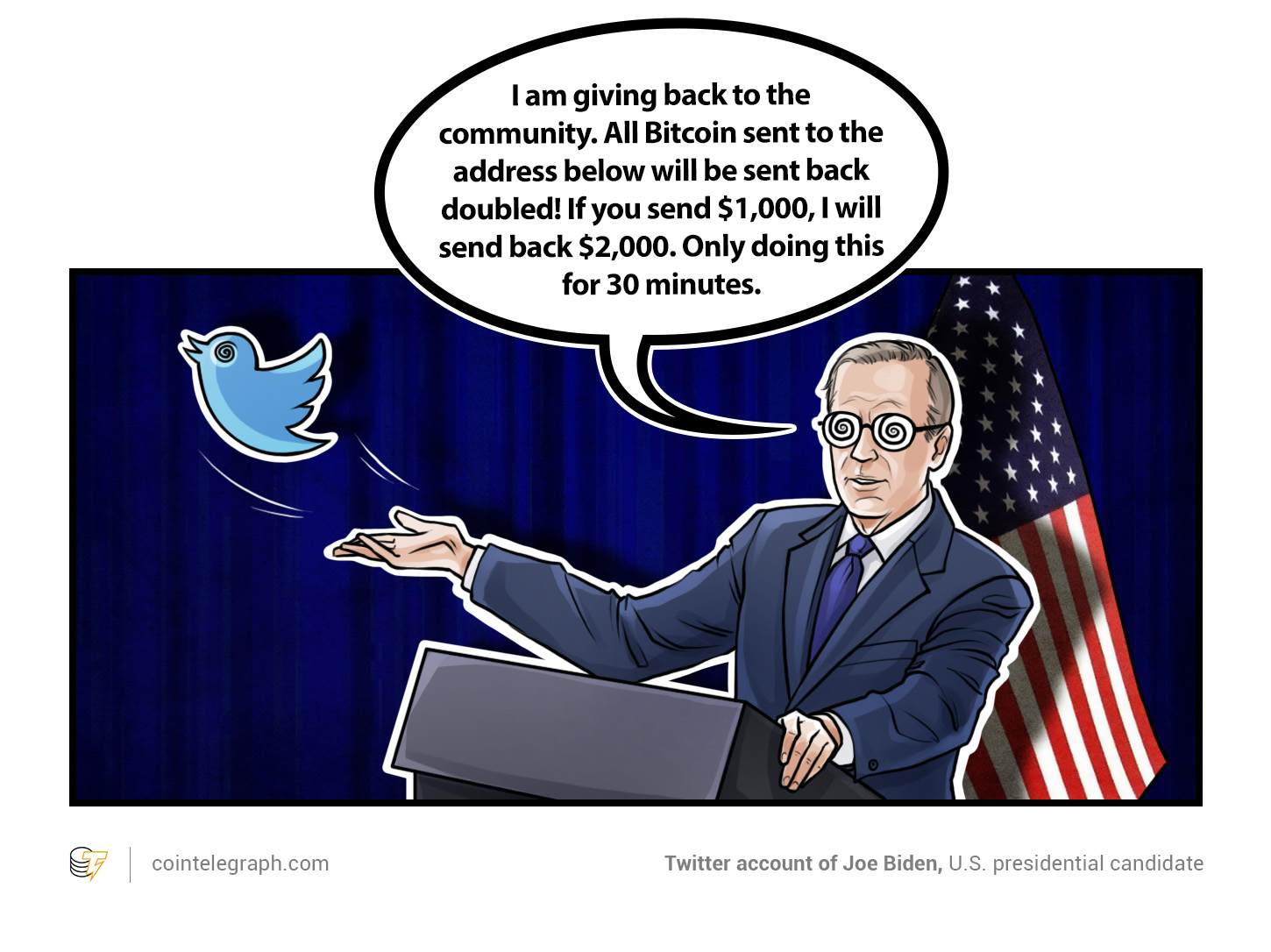 One mystery behind the hack is how the attackers obtained access to so many high-profile accounts. Some theories suggest it was an “inside job” and the work of a disgruntled former or current Twitter employee. Others claimed it was clear that the hackers had a “super low IQ” as anyone with access to so many influential accounts could have easily chosen to manipulate the markets through FUD rather than run giveaway scams. One journalist, Josh Barro, tweeted: “You know, we wouldn’t have to worry about this sort of thing if cryptocurrency was illegal. I’m not kidding. Crypto has no socially beneficial uses and quite a few socially harmful uses. Why is it allowed?” This argument was quickly shot down in flames — with others pointing out how Twitter’s centralized controls led to this mess in the first place. As Anthony Pompliano tweeted: “Twitter was hacked. Bitcoin has never been hacked.”

Let’s move on to some other news now. Bitcoin prices largely snoozed through the Twitter fiasco — remaining oddly serene and stuck in the low $9,000s. Cointelegraph analyst Michaël van de Poppe says there’s conflict in the markets, as both bullish and bearish arguments exist. He believes the bullish scenario is primarily built around breaking through the $9,200 resistance level, while the bearish scenario involves rejecting $9,200 and then losing support at $9,000. Van de Poppe added: “As Bitcoin’s price is most likely going to accelerate once it breaks above the $10,500 barrier, the opposite is true for the bearish case if $8,600 support does not hold. This is likely because there aren’t many support levels beneath $8,600, suggesting that the price can quickly drop $1,000 in a few hours as traders’ stop/losses may also add to downward pressure with the price dropping below a critical two-month-long support level. The next major support level beneath $8,600 is the $7,500 range.”

PayPal has confirmed that it is developing capabilities in the cryptocurrency space in a letter to the European Commission. In the letter, the payments giant said it was “continuously monitoring and evaluating developments in the crypto and blockchain/distributed ledger space.” The company also stressed that it favors a “harmonized” regulatory approach that wouldn’t compromise innovation. Earlier in June, it was reported that PayPal was considering introducing direct sales of crypto assets and offering users to store their crypto using the company’s in-house digital wallet. When asked to confirm or deny this, a representative told Cointelegraph that “PayPal does not comment on rumors or speculation.” Around the same time, PayPal announced two crypto-related openings, as it was looking for blockchain and crypto engineers. 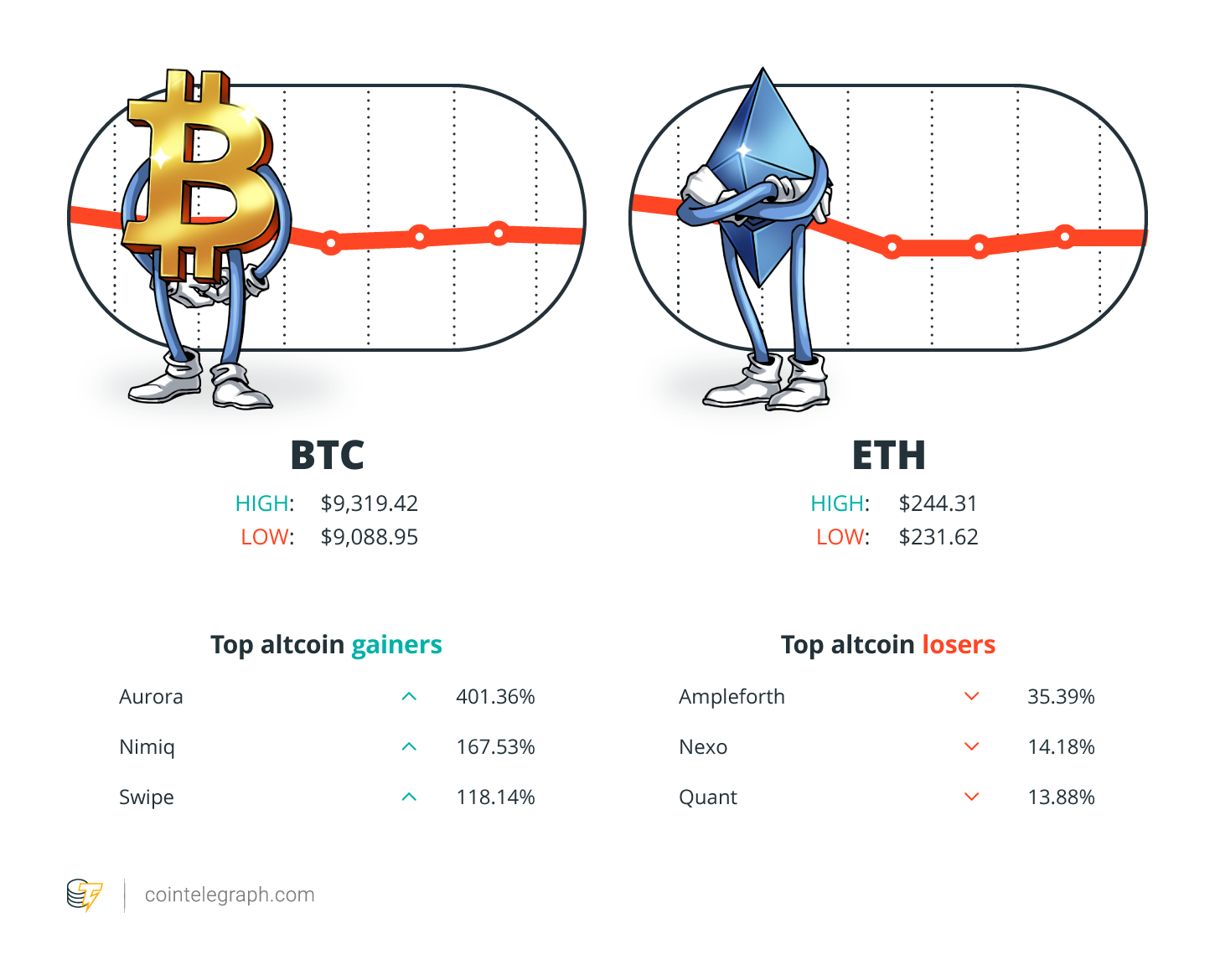 For more info on crypto prices, make sure to read Cointelegraph’s market analysis.

“We detected what we believe to be a coordinated social engineering attack by people who successfully targeted some of our employees with access to internal systems and tools. We know they used this access to take control of many highly-visible (including verified) accounts and Tweet on their behalf.”

“We cannot depend on centralized platforms, no matter how good their intentions are. These are single points of failure that you do not control.”

“It looks like all verified Twitter accounts have been hacked by someone running a #Bitcoin scam. For once not being verified has its advantages. I wonder if this is a harbinger of Bitcoin itself being hacked? Better to play it safe and just buy #gold.” 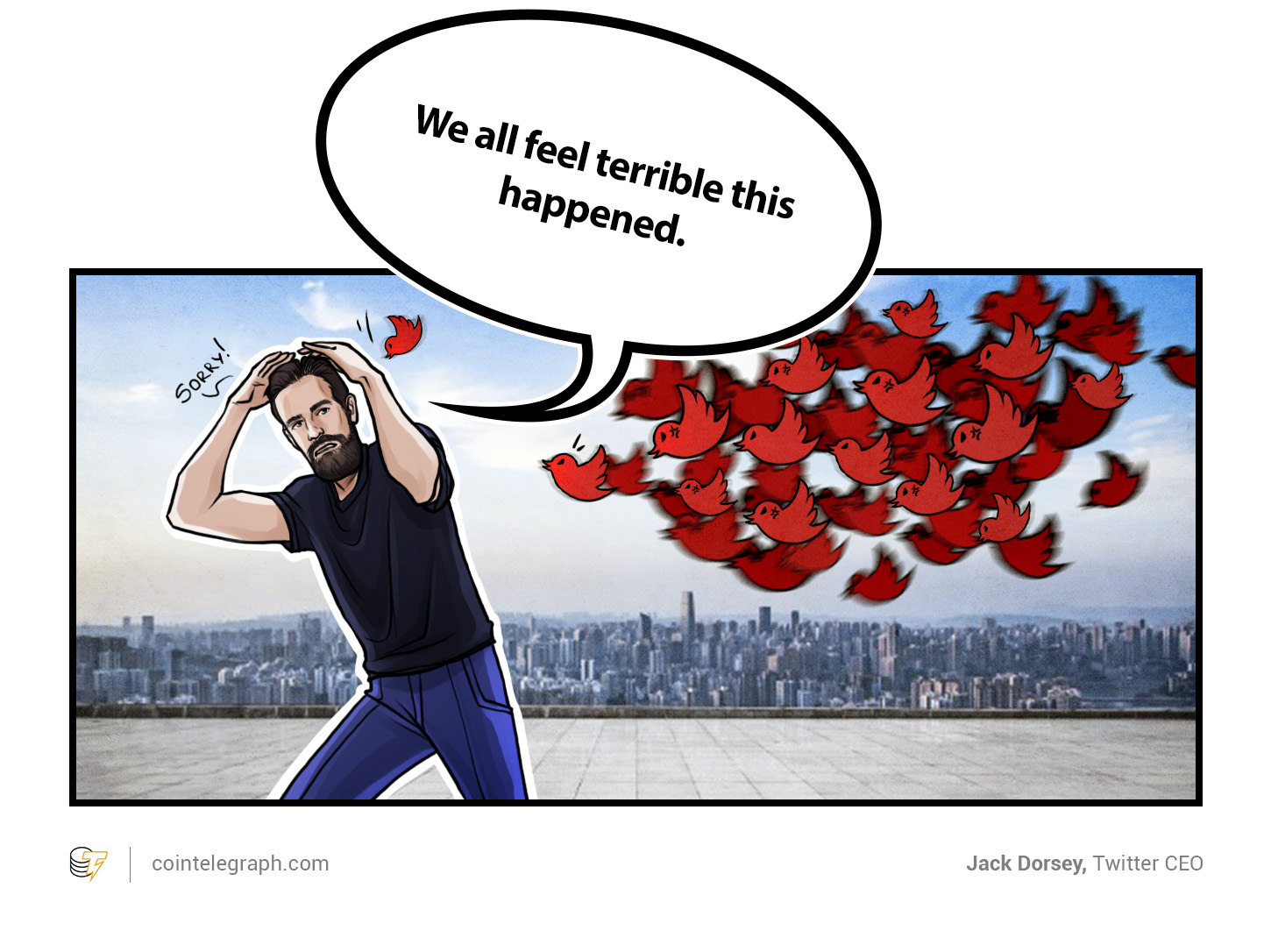 “Our users today don’t ever know we’re using Bitcoin when they’re using dollars. It’s just kind of like we’ve melted it in the background. I think tens of millions of people will be using this stuff in the next few years, and that just takes a little bit of capital.”

“We have seen a huge change in the tone towards blockchain technology in congress just since the pandemic. We have seen almost a 180 in that conversation. The pandemic has forced congress to go digital.”

Prediction of the Week

In July 2017, John McAfee boldly predicted that Bitcoin would hit $500,000 within three years — proclaiming he would “eat his own dick” on national television if he was wrong. Last year, he doubled down on that bet — and said he was adamant BTC would hit $1 million. Now, in a sign that such wild predictions aren’t to be trusted, McAfee has said he never believed Bitcoin would reach seven figures, describing it as an “old, tired worthless coin.” (Note: He’s previously said that his predictions were a joke designed to encourage newcomers to buy BTC.) Bitcoin investor and TV host Max Keiser sarcastically said that McAfee must be recovering in hospital after following through on his promise. “John McAfee honored his bet, made three years ago, to bite off his dick if Bitcoin wasn’t at $500,000. GOOD NEWS: He’s doing well at the hospital and expected to make a full recovery,” he said.

FUD of the Week

A Brazilian Jiu-Jitsu fighter has revealed he was one of the poor souls who missed out on Bitcoin’s all-time high in 2017 after misplacing his coins. Craig Jones, who is based in Australia, had bought the crypto in 2015 when the price was roughly $200–$400. Unfortunately for him, the 29-year-old champion couldn’t cash in when the price topped $20,000. He said: “Me and a couple of mates bought some bitcoin for s—-s and giggles and then forgot about it almost immediately. Then when things went crazy a couple of years later we were all frantically trying to work out who had the password but nobody could remember how to get our account back.” Now that’s a body blow.

A Texas resident has been accused of fraudulently filing loan applications for $1.1 million through the Paycheck Protection Program. Although he claimed he was seeking COVID-19 relief, it’s claimed he actually used the funds to purchase cryptocurrency. Joshua Thomas Argires submitted applications on behalf of two companies named “Texas Barbecue” and “Houston Landscaping,” falsely claiming that both businesses had numerous employees and hundreds of thousands of dollars in payroll expenses. According to a federal criminal complaint, he then began a series of transactions that ultimately resulted in $956,250 being transferred into a Coinbase account. Officials claim the 29-year-old committed wire fraud, and he has been charged by the U.S. Attorney for the Southern District of Texas.

Two Italian 17-year-olds have been arrested for paying Bitcoin to see children sexually abused, tortured and murdered on live streams. The deep web website used by the teenagers also allowed users to pay extra to decide what torture the children would be subjected to next. According to local media, viewers could request for hot oil to be poured over a victim, or for their arm to be amputated. The two were searched as part of an ongoing investigation that has so far involved 25 people — 19 minors and six over 18 — residing in 13 Italian provinces. It is unclear whether the website offering the services was shut down, but presumably, only some of its viewers were caught.

The recent Twitter hack shows us that centralized infrastructure is still vulnerable — but Oleksii Konashevych argues blockchain can change the paradigm. 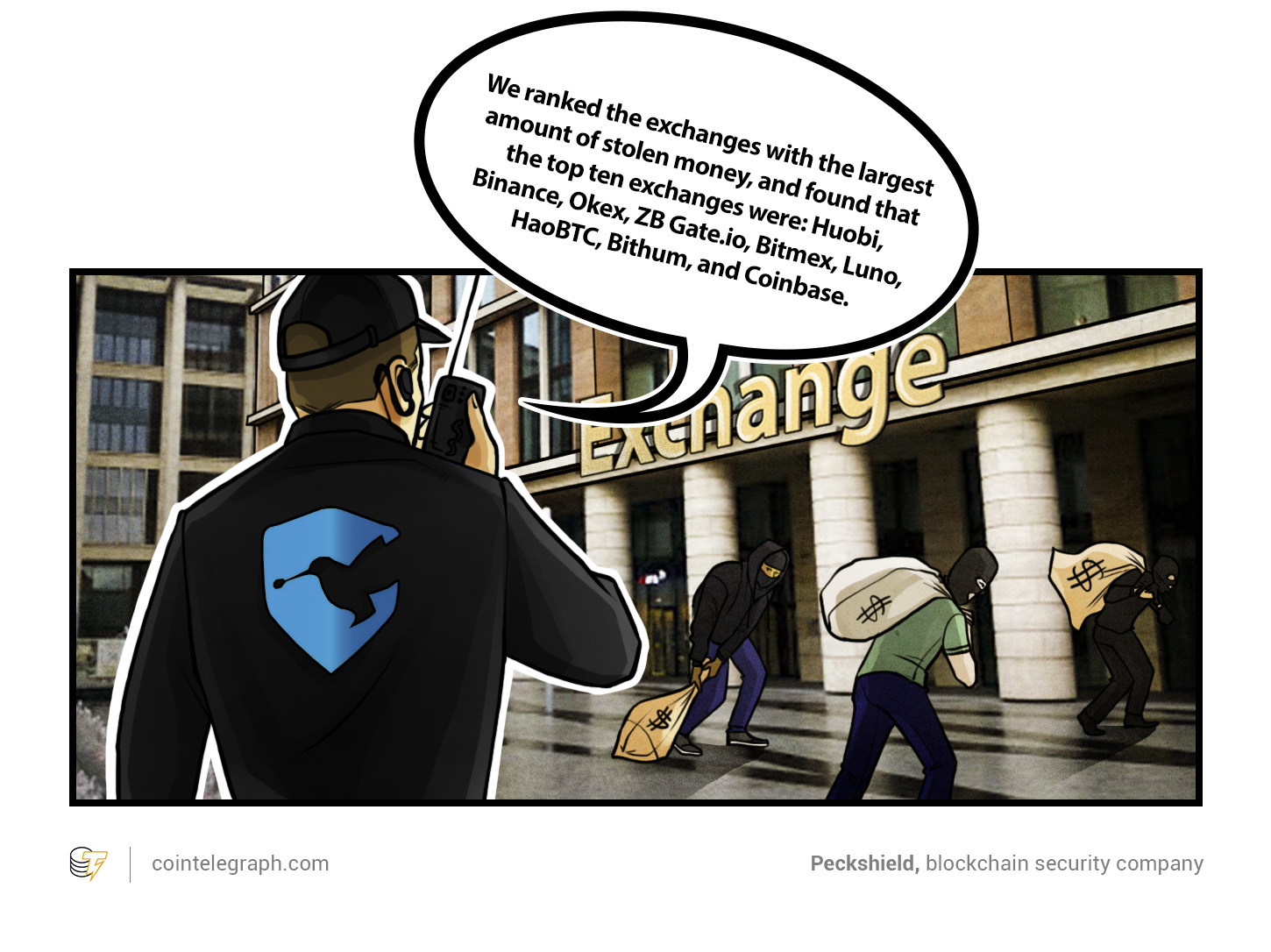 Bitcoin could be the next big inflation hedge

High-profile investors are concerned about the possibility of rising inflation — and they are turning to cryptocurrency to hedge against it. Mark Hipperson has more.

As 336 BTC gets stolen from crypto-friendly bank Cashaa, there is still no clear explanation for what happened. Anirudh Tiwari has the latest.

Chainlink has been the hottest cryptocurrency of the year, gaining nearly 1000% to its price since January.
But that meteoric rise came to a screeching halt over the weekend.

What Would it Take for the SEC to Approve a Bitcoin ETF? – Decrypt

The cryptocurrency industry is keen to understand what would lead the SEC to approve a Bitcoin ETF.
Pressure from investors and a viable framework to counter market manipulation are two factors that could swing opinion.

Attempting to stifle encryption is a waste of time, suggests Status security chief

Corey Petty, a chief security officer at Status messenger, told Cointelegraph that he believes there is no way to marry end-to-end encryption with the type of backdoor access law enforcement agencies continue to lobby for.